It's Carol Week at The Dickens Project - one of the most incredible weeks in our annual calendar. We'll be at the  The Dickens Project in Second Life  all week, presenting Charles Dickens' A Christmas Carol in a different section each day, multiple times a day.  Every session, a different trio of readers will present, accompanied with sound effects from Dagmar Kohime (turn your sounds on!)

All tours start in Dickens Square, near the main landing point.


Thursday, December 19th: Staves Four & Five - The Last of the Spirits & The End of It


Friday, December 20th: A Special Presentation - The Last of the Spirits & The End of It
@ 1pm: Aoife Lorefield, Caledonia Skytower, and Patch Linden
(come 15 minutes early and enjoy the WOOTMAS cheer of the Raglan Shire Carolers) 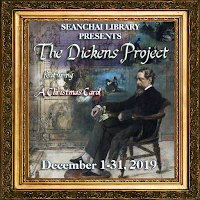 For additional events at The Dickens Project this week, including music, "A Very Misfit Christmas", and Fezziwig's Ball, check out the Dickens Calendar & Events Page

All sessions this week held at the  The Dickens Project in Second Life unless otherwise indicated. Schedule subject to change, because that is just how life rolls sometimes.