AT THE DICKENS PROJECT: Dance at The Docks! 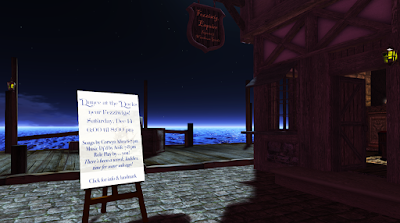 From 6-8pm slt at The Docks in Christmas Past
Music, dance AND a chance for role play!

The Setting: There's been a terrible storm at sea and a ship laden with goods has foundered and in sinking.

It's to salvage the goods on board! But is everyone there on the up and up? Some of these characters might not be helping the authorities but instead "salvaging" valuables right into their own pockets!

It's a tragedy ... for the ship owners. But with all the hustle and bustle, there's a bit of a party atmosphere. 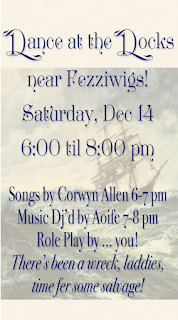 Before you know it, there's music and dance and drinking and eating and all kinds of goings on!

[Choose your character as you prefer or contact Aoife Lorefield to ask for suggestions!]

Period dress is requested for this event. This area outside Fezziwigs is not fancy, though, so come all ye urchins and other down at heels types! Some clothing can be found at the shops in Dickens Square.

Learn more about Roleplay at The Dickens Project
Posted by Seanchai Library at 10:00 AM