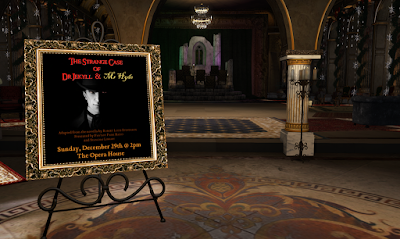 "Wait a darn minute!  That's not Dickens!"  No it's not.  Robert Louis Stevenson was a good 40 years Dickens' junior, and lived 20 years beyond.  Yet among other things, they have this one thing in common: despite all the lengthy and popular works of fiction that both men authored, the one that was their best seller, the one known all around the world, the one that has embedded itself into western culture, was not one of the big works.  The Strange Case of Dr. Jekyll & Mr. Hyde (published in 1886 at 27,622 words) was Stevenson's big hit!  Not unlike how A Christmas Carol (published n 1843 at 28,944 words) was Dickens'.

Both events today will take place at The Opera House.  Teleport directly, or from the Main Dickens Square Landing Point.
The Opera House
http://maps.secondlife.com/secondlife/The%20Dickens%20Project/105/157/501

Posted by Seanchai Library at 8:06 PM