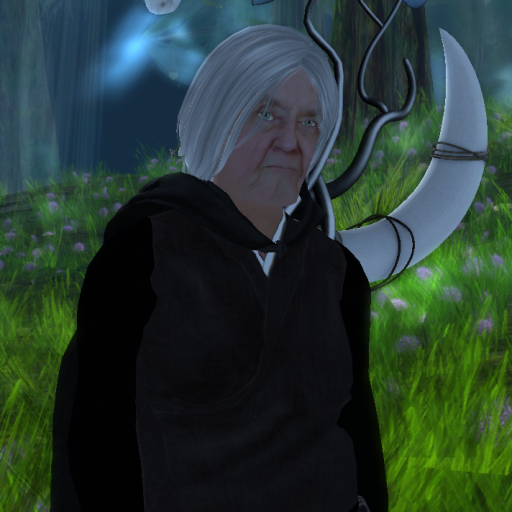 The Cailleach ... mean-tempered and "past her use-by date"? Wise and worth talking to? Magically powerful? Aoife's been fascinated by this character weaving her way through Celtic tales, and now brings her into SL with tales and poems. Come meet the Cailleach! Who knows what might happen?

In Ireland she is also associated with craggy, prominent mountains and outcroppings, such as Hag's Head (Irish: Ceann Caillí, meaning "hag's head") the southernmost tip of the Cliffs of Moher in County Clare.  The megalithic tombs at Loughcrew in County Meath are situated atop Slieve na Calliagh (Irish:Sliabh na Caillí, meaning "the hag's mountain") and include a kerbstone known as "the hag's chair".  Cairn T on Slieve na Calliagh is a classic passage tomb, in which the rays of the equinox sunrise shine down the passageway and illuminate an inner chamber filled with megalithic stonecarvings.

In Scotland legend has it that the Cailleach was tired from a long day herding deer. Atop Ben Cruachan she fell asleep on her watch and a well she was tending overflowed, running down from the highlands and flooding the valleys below, forming first ariver and then the loch.The overflowing well is a common motif in local Gaelic creation tales - as seen in the goddess Boann's similar creation of the River Boyne in Ireland. Other connections to the region include her above-mentioned strong ties with the fierce whirlpool in the Gulf of Corryvreckan.
Posted by Caledonia S at 8:34 PM