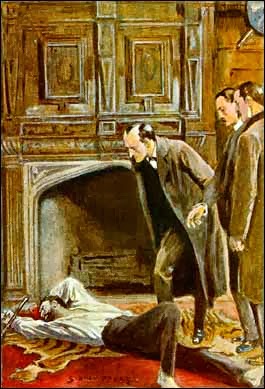 Corwyn and Caledonia crack open yet another case from THE RETURN OF SHERLOCK HOLMES!  Grabba a cuppa and join him at the fireside for another thrilling adventure.  THIS WEEK"The Adventure of the Abbey Grange."

Holmes wakes Doctor Watson up early one winter morning to rush to a murder scene at the Abbey Grange near Chislehurst. Sir Eustace Brackenstall has been killed, apparently by burglars. Inspector Stanley Hopkins believes that it was the infamous Randall gang, a father and two sons, who have committed several other burglaries in the neighborhood.

Holmes and Watson arrive at Abbey Grange, where Lady Brackenstall is resting with a purple swelling over one eye, the result of a blow during the previous night's incident. There are also two red spots on her arm. Her maid, Theresa Wright, who has been with her mistress since she was born, later tells Holmes that Sir Eustace stabbed her with a hatpin.