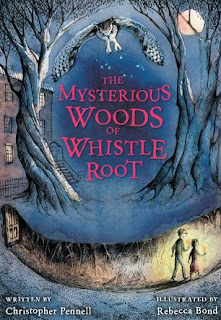 11-year-old Carly Bean Bitters suffers a peculiar malady: she can only sleep by the light of day, and
is awake through the night, spending her time up in the attic of her aunt’s house, awaiting the arrival of the dawn.

One night, she notes a strange squash that appears on her roof. Investigating, she comes across Lewis, a fiddle-playing rat. Lewis tells Carly the squash is a replacement for one of the rats in the group who has been abducted by owls.

He goes on to explain that until recently, the owls join with the rats dancing in the moonlight within the Whistle Root woods to the music played by Lewis and has band. But then something changed, and instead of dancing with the rats, the owls took to abducting them.

Grabbed by an owl herself, Carly find herself dropped into the woods where she meets the once happy community of rats, now gravely threatened by the hostile owls. At school, and struggling to stay awake, she also finds a strange note warning that the “Moon Child” is in danger.

Enlisting the help of another strange child, Green, who spend his time hiding under the library, Carly sets out to solve the riddle of the “Moon Child” and the reason for the owls’ change in behaviour – and along the way, discovers something unexpected about herself.