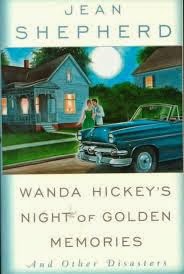 Before Garrison Keillor and Spalding Gray there was Jean Shepherd: a master monologist and writer who spun the materials of his all-American childhood into immensely resonant--and utterly hilarious--works of comic art.
"Wanda Hickey's Night of Golden Memories" is a universal (and achingly funny) orchestration of Midwestern puberty rites, including the memorable disaster that was Shepherd's (and everyone else's) junior prom.
A comic genius who bridges the gap between James Thurber and David Sedaris, Shepherd may have accomplished for Holden, Indiana, what Mark Twain did for Hannibal, Missouri.
Kayden Oconnell & Caledonia Skytower, Live in voice
Posted by Caledonia S at 6:47 PM