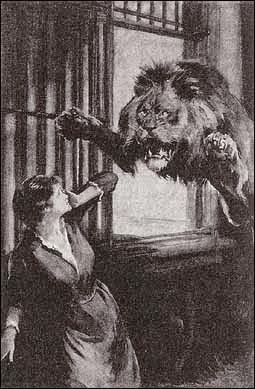 Published in 1927, THE CASEBOOK OF SHERLOCK HOLMES is the final collection of Holmesian short stories penned by Arthur Conan Doyle.  Corwyn, Kayden and Cale continue their magical mystery tour of this canon of work

TODAY: "The Adventure of the Veiled Lodger"


Holmes is visited by Mrs. Merrilow, a landlady from South Brixton who has an unusual lodger who never shows her face. She saw it once accidentally and it was hideously mutilated. This woman, formerly very quiet, has recently taken to cursing in the night, shouting “Murder, murder!” and “You cruel beast! You monster!”
Also, her health has taken a turn for the worse, and she is wasting away.
Mrs. Merrilow has brought this case to Holmes’s attention as her tenant, Mrs. Ronder, will not involve the clergy or the police in something that she would like to say. She has told her landlady to mention Abbas Parva, knowing that Holmes would understand the reference.
Indeed he does. It was a most tragic case in which a circus lion somehow got loose and savaged two people, one of whom was killed, and the other badly disfigured.

AND A BONUS:  From Sir Arthur Conan Doyle's other non-Holmesian works The Case of Lady Sannox.

Presented Live in Voice in the Seanchai Fireside Room, downstairs.
Posted by Caledonia S at 10:51 PM