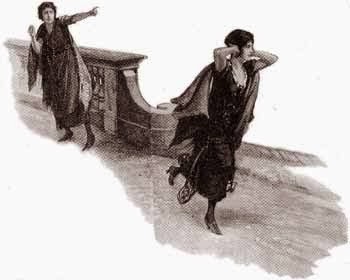 Corwyn and Cale go it as a duet this week with more from THE CASEBOOK OF SHERLOCK HOLMES, the final collection of Holmesian short stories penned by Arthur Conan Doyle.   TODAY: "The Problem of Thor Bridge."


Neil Gibson, the Gold King and former Senator for "some Western state", approaches Holmes to investigate the murder of his wife Maria in order to clear his children's governess, Grace Dunbar, of the crime. It soon emerges that Mr. Gibson's marriage had been unhappy and he treated his wife very badly. He had fallen in love with her when he met her in Brazil, but soon realised they had nothing in common. He became attracted to Miss Dunbar; since he could not marry her, he had attempted to please her in other ways, such as trying to help people less fortunate than himself.

Maria Gibson was found lying in a pool of blood on Thor Bridge with a bullet through the head and note from the governess, agreeing to a meeting at that location, in her hand. A recently discharged revolver with one shot fired is found in Miss Dunbar's wardrobe. Holmes agrees to look at the situation in spite of the damning evidence.

Presented live in voice, in the Seanchai fireside room (downstairs).
Posted by Caledonia S at 6:40 PM