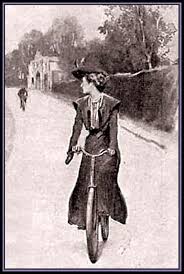 THIS WEEK:  "The Adventure of the Solitary Cyclist" from THE RETURN OF SHERLOCK HOLMES

Holmes is contacted by Miss Violet Smith of Farnham, Surrey about an unusual turn in her and her mother’s lives. Violet’s father has recently died, and left his wife and daughter rather poor. However, a notice appeared in the newspaper not much later inquiring as to their whereabouts. Answering it, they met Mr. Carruthers and Mr. Woodley, the former a pleasant enough man, but the latter a churl and a bully. They had come from South Africa, where they had known Violet’s uncle Ralph Smith, who had now also died in poverty and apparently wanted to see that his relatives were provided for. This struck Violet as odd, since she and her family had not heard a word from Uncle Ralph since he'd gone to South Africa 25 years ago. Carruthers and Woodley explained that before dying, Ralph had heard of his brother’s death and felt responsible for his survivors’ welfare.

Carruthers began by offering Violet a job as a live-in music teacher for his ten-year-old daughter at £100 a year, about twice the going rate. She accepted after Carruthers said that she could visit her mother on weekends. That went well until Mr. Woodley came to stay for a week. He made the most oafish, clumsiest sexual advances and boasted that if Violet married him, she would have a life of luxury. He even grabbed her and demanded a kiss, precipitating expulsion by his host, Carruthers. Violet has not seen Woodley since.