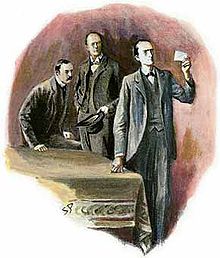 Mr. Hilton Cubitt of Ridling Thorpe Manor in Norfolk visits Sherlock Holmes and gives him a piece of paper with this mysterious sequence of stick figures.  The little dancing men are at the heart of a mystery which seems to be driving his young wife Elsie to distraction.