"The Murder at the Vicarage" continues,
with Episode 2! 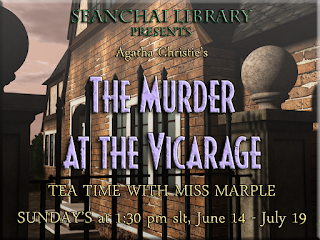 A man has been murdered right in the Vicarage study. But who could possibly want to kill Colonel Protheroe?  Turns out there's more suspects than you can count on one hand. This week: the suspects begin to emerge. There's not just one confession, but two!

"‘Anyone who murdered Colonel Protheroe,’ declared the parson, brandishing a carving knife above a joint of roast beef, ‘would be doing the world at large a favour!’ It was a careless remark for a man of the cloth. And one which was to come back and haunt the clergyman just a few hours later – when the colonel was found shot dead in the clergyman’s study. But as Miss Marple soon discovers, the whole village seems to have had a motive to kill Colonel Protheroe."
~ from agathachristie.com

Email ThisBlogThis!Share to TwitterShare to FacebookShare to Pinterest
Labels: Agatha Christie, Tea Time, The Murder At The Vicarage