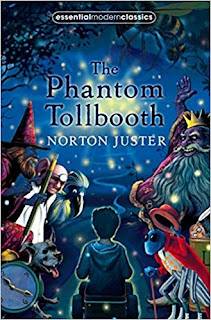 Finn Zeddmore reads Norton Juster’s fantasy adventure for younger readers.
For Milo, everything is a bore and all activities little more than a waste of time. Then one day he arrives home in his usual state of disinterest, only to find a package waiting for him. He has no idea where it has come from or who might have sent it, but is clearly intended for him, given the label. Opening it, he discovers a small tollbooth and a map of “the Lands Beyond,” illustrating the Kingdom of Wisdom.
Reading the limited instructions – that warn him to have a destination from the map in mind – and thinking the package to be some kind of game, he sets the tolbooth up, decides Dictionopolis should be his destination, and propels the accompanying little car through the tollbooth.
Immediately he finds himself driving an actual car through a city that is clearly not his own. Here he discovers he must remain focused, lest his thoughts wander, and his journey wanders as well; a lesson he only discovers when he does daydream and finds himself in the Doldrums.
As he travel and meets new friends, so he also discovers something else: life is far from boring or dull; it actually offers much to be discovered.
Presented live in Voice. https://maps.secondlife.com/secondlife/Holly%20Kai%20Estates/215/44/27
Posted by Seanchai Library at 7:32 PM