TUESDAY, March 3rd at 7pm: VERY FAR AWAY FROM ANYWHERE ELSE Begins 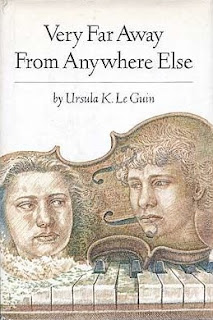 Ursula le Guin remains best know for her intelligent science fiction and fantasy stories. However, Willow Moonfire brings us one of her books that steps away from that genre entirely
A moving coming-of age tale, the tale centers on 17-year-old Owen, who is in the middle of his senior year in high school. A loner and intellectual, Owen is an introspective young man who hasn’t found any deep connections to anyone; only his interest in science offers a point of focus for him. While he does spend time with his two closest friends, is a member of various groups at school and enjoys sports, he looks upon that side of his life as a fiction, no more real to him than the pretend utopian world of Thorn, a place he created in his imagination whilst a child.
But Thorn is no longer a place of escape for him; it has become beyond his reach as he moves towards adulthood, and he must now face turning the “fiction” of the physical world into a reality in which he can function and move beyond the potential breakdown he might otherwise face, escape the threat of repeating the lives of his parents and take control of his destiny. (our thanks to Inara Pey for assistance with this content description)