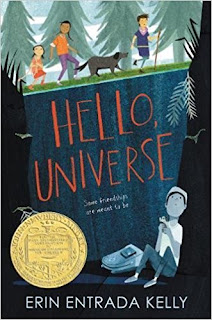 When we left Virgilio, he was trapped in a well with only his imagination and Gulliver the guinea pig to keep him company.  But is he truly alone?  As characters his Lola has instilled in his consciousness from Philippine folklore visit him, and the friends he doesn't fully realize he has search for him, Virgilio is poised on the brink of the universe.

Posted by Seanchai Library at 6:13 PM