I would define, in brief, the poetry of words
as the rhythmical creation of Beauty.
~ Edgar Allan Poe 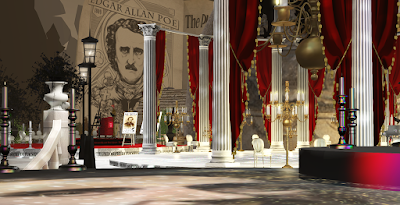 ***
...when you have eliminated the impossible, whatever remains, however improbable, must be the truth?
~ Sherlock Holmes 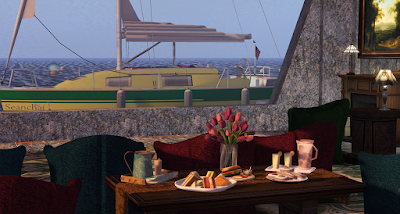 @ 1:30pm ...
TEA TIME at Baker Street: A Study in Scarlet
Continuing (Part 3 of 4) in the Seanchai Library Fireside Room.

The story flashes back to the in in 1847, where John Ferrier and a little girl named Lucy, the only survivors of a small party of pioneers, lie down near a boulder to die from dehydration and hunger. They are discovered by a large party of Latter-day Saints led by Brigham Young. The Mormons rescue Ferrier and Lucy on the condition that they adopt and live under their faith. Ferrier, who has proven himself an able hunter, adopts Lucy and is given a generous land grant with which to build his farm after the party constructs . Years later, a now-grown Lucy befriends and falls in love with a man named Jefferson Hope.