JOIN US FOR 6:30pm SPECIAL Pre-Show Story!!
We present an excerpt from the book 'Ready Player One'
When Parzival plays the song Discovery from the Rush:2112 album it leads to a hidden message essential to unlocking the third gate after finding the Crystal Key! 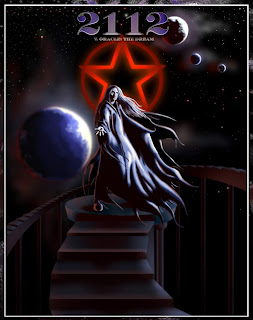 "We have assumed control"
RUSH 2112: ANTHEM
Tonight we complete our exploration of a famous musical album and the two stories behind it...

In the year 2062, a galaxy-wide war results in the union of all planets under the rule of the Red Star of the Solar Federation. By 2112, the world is controlled by the "Priests of the Temples of Syrinx", who determine the content of every facet of life. Then a man discovers a guitar and learns to play different kind of music.

The album is loosely based on the novella 'Anthem' by Ayn Rand that takes place at an unspecified future date when mankind has entered another Dark Age. Technological advancement is now carefully planned and the concept of individuality has been eliminated. A young man known as Equality 7-2521 rebels by doing secret scientific research. When his activity is discovered, he flees into the wilderness with the girl he loves.