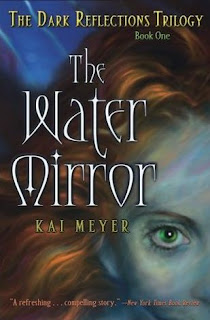 Merle is apprenticed to a maker of magic mirrors. She even has one of her own, with a surface of water into which she can reach without ever getting wet – magic being a relatively common thing in . Meanwhile, her friend Serafin, once a master thief, now works for a weaver of magic cloth.

Both Merle and Serafin accept the wonders of the city, from the mermaids in the canal to the stone lions on which the city guards ride on their patrols. But all is not well; beyond the walls of the city, the Egyptian Empire is laying siege, an army of mummy warriors and flying sunbarks held at bay by the power of the Flowing Queen, which runs through the city’s canals and hold the enemy forces at bay.

Then Merle and Serafin overhear a plot to capture the Flowing Queen and render the city defenseless. And while no-one actually knows what the Queen looks like, they set out to protect and / or rescue her. In doing so, they must ally themselves with the Ancient Traitor and journey into the realm of Dark Reflections…