MONDAY, October 2nd at 7pm: A WIZARD OF EARTHSEA Concludes 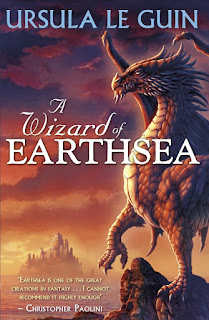 Written by the American author Ursula K. Le Guin, and first published by the small press
in 1968, A Wizard of Earthsea is regarded as a classic of fantasy and children's literature -  widely influencing the entire genre.

Set in the fictional archipelago of Earthsea, the story centers around a young mage named Ged, born in a village on the . Displaying great power while still a boy, he joins the school of wizardry, where his prickly nature drives him into conflict with one of his fellows. During a magical duel, Ged's spell goes awry and releases a shadow creature that attacks him. The novel follows his journey as he seeks to be free of the creature.