WEDNESDAY, October 25th at 7pm: SOMEWHERE IN MY MIND THERE IS A PAINTING BOX 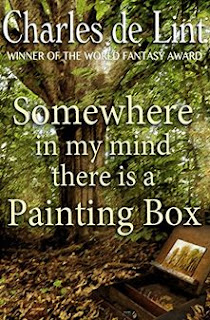 Aoife Lorefield reads Charles de Lint’s 2002 short story spin-off from his The Cats of Tanglewood series, and first published as a part of The Green Man: Tales from the , edited by Ellen Datlow & Terri Windling

In this tale, Lillian, the protagonist from Cats is now in her mid-teens and hungry for her life to broaden; she longs to be an artists, but has neither the money nor training to achieve her desire. Then, whilst wandering in the forest one day, she discovers a paint box, long abandoned. Examining it, she recognizes the name on one of the panels with the box as that of  an artist famed for his pieces depicting the forest, but who disappeared years earlier, along with his apprentice.

Later, Lillian encounters the artist’s apprentice, looking not a day older than when he and the artists vanished. He tells her a tale of their having crossed into another realm, and her past experiences with magic allow her to accept the story. That world, the apprentice explains, is so beautiful neither he nor the artist wanted to return – and Lillian finds herself on the tip of a bittersweet voyage of discovery.

Email ThisBlogThis!Share to TwitterShare to FacebookShare to Pinterest
Labels: Aoife Lorefield, Charles de Lint, Somewhere in my mind there is a Painting Box