Seanchai Library continues to share tales from The Casebook of Sherlock Holmes, the final set of twelve Sherlock Holmes short stories first published in the Strand Magazine between October 1921 and April 1927. 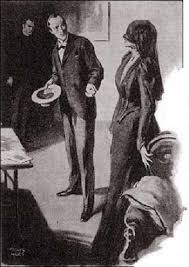 This week: The Adventure of the Veiled Lodger

Holmes is visited by Mrs. Merrilow, a landlady from who has an unusual lodger who never shows her face. She saw it once accidentally and it was hideously mutilated. This woman, formerly very quiet, has recently taken to cursing in the night, shouting "Murder, murder!" and "You cruel beast! You monster!" Also, her health has taken a turn for the worse, and she is wasting away. Mrs. Merrilow has brought this case to Holmes’s attention as her tenant, Mrs. Ronder, will not involve the clergy or the police in something that she would like to say. She has told her landlady to mention Abbas Parva, knowing that Holmes would understand the reference.

Unique among the canon, this story does not involve an eminent crime, but one that has occurred long since, whose sinister details are revealed as part of a confession.


The Case of Lady Sannox is a short story by Sir Arthur Conan-Doyle (non-Holmesian) that features an arrogant surgeon, Douglas Stone, who is in love with the married Lady Sannox, one of the most beautiful women in . On his way to a rendezvous with her, the surgeon is asked by a Turkish man to operate on the latter's wife, who has cut her lip with a poison envenomed scimitar. The doctor is informed the woman will die if the poison is not cut out.

Live in voice in the Seanchai Fireside room, downstairs.