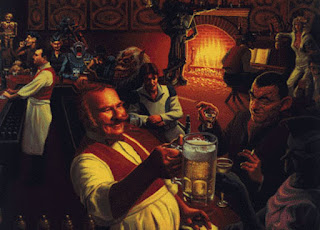 The titular saloon is a haven for lost souls; a place where the patrons come for one drink and a chance for a second – but only if they offer an unburdening toast at the fireplace. Mike Callahan, the owner, never judges but sometimes advises in as few words as possible.

In the first story in the collection, Callahan thinks he’s heard it all until one day, The Guy With The Eyes comes in.

He spends an hour nursing his first drink, then steps up to the fireplace and unburdens himself with the news that he’s an alien, a harbinger of doom for Earth, who will be returning home in just a couple of hours. But when he does, his masters will destroy the planet, convinced human kind is a cancer. Only he’s no longer convinced that this is true, and no longer wants to see the world destroyed…