It's Finally Here!  And we have two sessions featuring original works to celebrate the day: 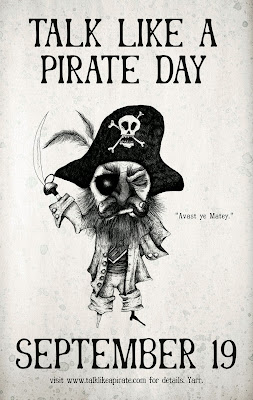 @ 7PM: GEORGE WAS A PIRATE...
R. Crap Mariner's "Pirate George" canon of 100w stories have become a favorite at Seanchai Library.  Beginning just about a year ago, George has had all manner of misadventure, in story after story.  Tonight Corwyn, Faerie, Kayden, and Caledonia will bravely share George's various pirate adventures, selected randomly from the "George stories," and read "cold" - with no advanced preparation.

In “Hang My Body on the Pier”, a pirate queen's memoirs tell of her rise to power at the end of the golden age of Atlantic piracy. Orphaned, young Magdalena joins a pirate crew that carves a path of destruction along the coast of colonial America.  But as she matures and can no longer pass for a male, she realizes that a woman's place is in the captain's chair. There’s just one thing she needs to do before she can get her own ship… Steal a whole lot of money!

Mags is regular at Seanchai Library events, but this will be the first time she's risen out of the chairs as an author to share this story.  Come along and learn more.  You can also read along with a PDF you can download free of charge from the author at: https://app.box.com/s/3j34gz13xifli542h55pt7r33rojqnjx