Seanchai Library continues to share tales from The Casebook of Sherlock Holmes, the final set of twelve Sherlock Holmes short stories first published in the Strand Magazine between October 1921 and April 1927. 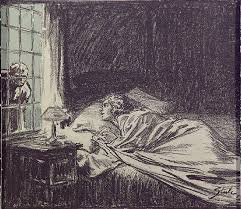 This week: The Adventure of the Creeping Man

The tale is a most peculiar one indeed, and not just for the story itself; The Adventure of the Creeping Man veers somewhat away from Conan Doyle’s usual scientific approach to the unravelling of the mysteries Holmes and Watson face; so much so that it has met with much debate among critics down the years.

Live in voice in the Seanchai Fireside room, downstairs.
http://maps.secondlife.com/secondlife/Holly%20Kai%20Estates/215/44/27

More selections from the first two books in Lloyd Alexander's THE CHRONICLES OF PRYDAIN: "The Book of Three" and "The Black Cauldron." Join the adventures of Taran, Gurgi, Eilonwy and Fflewddur Fflam.

Caledonia Skytower at the Golden Horseshoe in .  http://maps.secondlife.com/secondlife/Bracket/180/56/31
Posted by Caledonia S at 11:55 AM