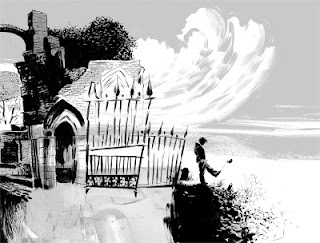 Nobody Owens is growing up in the graveyard, and his rearing and education is not made any easier for the ghostly residents of the graveyard who have him under their protection. "Bod" never been to the unhallowed portion of the cemetery on the hill before, but in a moment of anger and frustration he goes there, and meets an unlikely friend.  Meanwhile, forces outside the graveyard continue their ill-intended to search for a child who disappeared - a very important child.