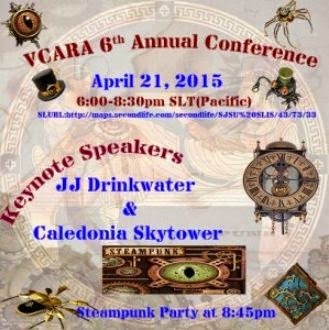 @ 6PM: 2015 VCARA (Virtual Centre for Archives & Records Administration) Conference, organised and hosted by the San José State University’s School of Information, take place in Second Life.The title for the conference, which is now in its sixth year, is Within Our Grasp: Exploring Reality – Virtually, and speakers explore the means by which virtual environments and activities have meaning and impact in the physical world.
The Keynote speakers @ 6PM:  JJ. Drinkwater from Caledon Library "Sideways Into the Past, or, What Does the Flying Clockwork Under-Footman’s Aerostatic Tea-Tray Have to Tell Us?" and @ 6:30pm Caledonia Skytower from Seanchai Library - "If You Build It, It Is Still Just Stuff"
Click here for more information on the conference

@7:10PM - CAITILIN & ELIZABETH (After the VCARA Keynotes and "back at the Seanchai Ranch) Two Poems & Two Stories from Two Masterful Ladies...
THE GOVERNESS by Elizabeth Bear. A governess takes a position in a very troubled household.

THRESHOLD by Caitlin Kiernan. Chance doesn’t believe in angels. Or monsters. But among the artifacts left by her geologist grandparents, there lies a fossil of a creature that couldn’t possibly have ever existed.