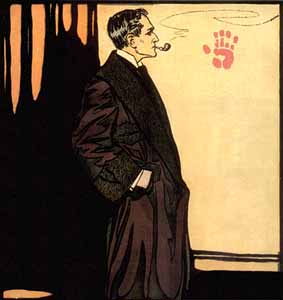 "The Return of Sherlock Holmes" continues this week with THE ADVENTURE OF THE NORWOOD BUILDER.

Sherlock Holmes and Dr. Watson are visited by "the unhappy John Hector McFarlane", a young lawyer from Blackheath who has been accused of murdering one of his clients, a builder called Jonas Oldacre. McFarlane explains to Holmes that Oldacre had come to his office only the day before and asked him to draw up his will in legally appropriate terms. McFarlane saw to his surprise that Oldacre was making him the sole beneficiary, and heir to a considerable bequest at that. McFarlane could not imagine why, although Oldacre claimed that it was due to a prior relationship with McFarlane's mother, which gave him reliable knowledge that McFarlane could be trusted, and a lack of any biological relatives for him to leave his assets to.

Presented Live in Voice with Corwyn Allen and Caledonia Skytower.
Posted by Caledonia S at 12:39 PM