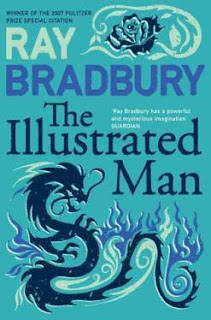 Willow Moonfire reads Ray Bradbury’s 1951 classic that has never been out of print, live on stream.

A magnificent tapestry of science fiction, fantasy, and horror, The Illustrated Man offers 18 stories that have been built around the recurring theme of the conflict between the cold mechanics of technology and the variable psychology of humans.

An unnamed narrator meets a vagrant wanderer, a former member of a freak show known as The Illustrated Man on account of his entire body being covered in exotic tattoos. But these are not ordinary tattoos: each is imbued with a magical life of its own, allowing Bradbury to use them as a device to draw his readers into the 18 unique tales within the book.

Included are tales like The Veldt, a chilling tale of what happens when children are left within a VR environment without context or parental supervision; or  Kaleidoscope, the story of how astronauts trapped in orbit chose to face a return to Earth without the benefit of a space craft; or  – particularly poignant for our time: how does a black society that has removed itself from the racism of Earth by moving to Mars handle the arrival of a white group of colonists from their former home planet?

Live in The Glen.

Posted by Seanchai Library at 9:21 PM