TUESDAY, February 25th at 7pm: THE TRUTH IS A CAVE IN THE BLACK MOUNTAIN 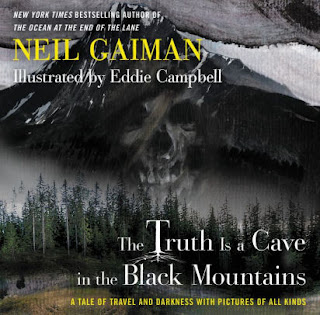 Two men, bearing both guilt and secrets, and not really known to one another, set out on a journey to reach the Misty Isle where, it is said, there lies a cave filled with gold from which a many might take as much as he can carry.

One bears guilts he can both forgive and not forgive of himself, the other bearing his own secrets. The reasons for the guilt and the secrets gradually come to the fore as they travel across a landscape as bleak and as hard as their lives. Along the way, they encounter others, travelers,  householders, and a ferryman. They are similarly hard and suspicious, and also reflect the Jacobite landscape of where they reside.

Over time, MacInnes, the taller of the two and the one that knows the way to the cave, reveals more of it to his smaller, guilt carrying companion, warning that the cave carries a particular price for those who seek it: It strips away a little bit of anyone who enters.
Willow Moonfire presents Neil Gaiman's dark, exquisite tale - live on stream.
http://maps.secondlife.com/secondlife/Holly%20Kai%20Estates/215/44/27

Posted by Seanchai Library at 7:46 AM

Email ThisBlogThis!Share to TwitterShare to FacebookShare to Pinterest
Labels: Neil Gaiman, The Truth is a Cave in the Black Mountains, Willow Moonfire