~ at 6:30pm:  MAGICLAND STORYTIME: "The Secret Garden" Continues. Caledonia Skytower, live on stream at The Golden Horseshoe at Magicland Park.

*TUESDAY, February 11th, at 7pm: More from the Liaden Universe - THE HOUSE  with Ktadhn Vesuvino, live on stream. 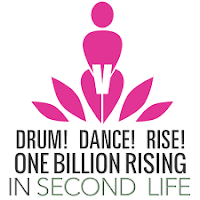 *FRIDAY, February 14th at 3pm:   Seanchai Library at ONE BILLION RISING SL. Aoife Lorefield, Dubhna Rhiadra, Willow Moonlight, and Caledonia Skytower share an hour of stories and poems in support of this movements annual global statement to end violence against women. (SLURL available in posts and notices on the day of the event)

*SATURDAY, February 15th at 3pm:   Seanchai Library at Lanagan Park, with LOVE: in Words and Music. Ktadhn Vesuvino and Caledonia Skytower reprise their creative exploration of love in its many iterations through poetry and songs - it's not all hearts and flowers!  Some new selections added this year. Live on stream.
http://maps.secondlife.com/secondlife/Froog/29/46/252