"Adventure came to him not so much because he sought it as because he brazenly expected it. He believed that life was full of adventure, and he went forward in full blaze and surge of that believe." 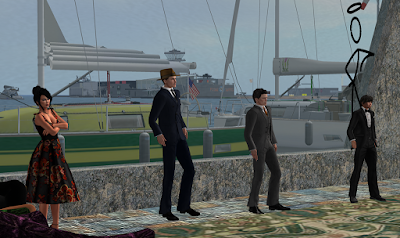 The Saint is featured in a series of books by Leslie Charteris published between 1928 and 1963. Simon Templar is a Robin Hood-like criminal known as The Saint.  Blessed with boyish humour, he makes humorous and off-putting remarks and leaves a "calling card" at his "crimes," a stick figure of a man with a halo over his head. He is described as "a buccaneer in the suits of Savile Row, amused, cool, debonair, with hell-for-leather blue eyes and a saintly smile."

TODAY: Part 2 of The Man Who Was Clever with David Abbot, Corwyn Allen, Kayden Oconnell, and Caledonia Skytower, live in voice in the Library's Fireside Room (Downstairs).