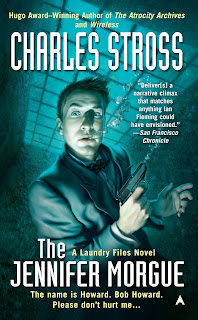 Saving the world from evil is a 24/7 job—No overtime pay included.

"In this alternately chilling and hilarious sequel to The Atrocity Archives (2004) from Hugo-winner Stross, Bob Howard is a computer übergeek employed by the Laundry, a secret British agency assigned to clean up incursions from other realities caused by the inadvertent manipulation of complex mathematical equations: in other words, magic."  ~ Publishers Weekly

Posted by Seanchai Library at 9:05 AM