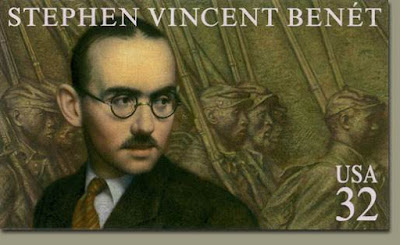 Stephen Vincent Benét was an American poet, short story writer, and novelist. Benét is best known for his book-length narrative poem of the American Civil War, "John Brown's Body" (1928), for which he won a Pulitzer Prize in 1929, and for two short stories, "The Devil and Daniel Webster" (1936) and "By the Waters of Babylon" (1937).

His story "The Sobbin' Women" was adapted into a motion picture in 1954, featuring music by Johnny Mercer and retitled "Seven Brides for Seven Brothers."  The screenplay and score have since been adapted for the stage. In 2009, The Library of America selected Benét’s story "The King of the Cats" (1929) for inclusion in its two-century retrospective of American Fantastic Tales, edited by Peter Straub.