Beware the Ides of March?  You needn't at Seanchai Libraries.  We have two great story sessions today in two virtual worlds:

11:00am at Seanchai Kitely - THE QUIET MAN with Caledonia

If you missed it at Seanchai SL then here's your chance to catch up.  If you are an OS devotee and you haven't heard this story, or Caledonia presenting this story, you are in for a rare treat!

"Shawn Kelvin, a blithe young lad of 20, went to the States to seek his fortune. And 15 years thereafter he returned to his native Kerry, his blitheness sobered and his youth dried to the core, and whether he had made his fortune or whether he had not no one could be knowing for certain. For he was a quiet man, not given to talking about himself and the things he had done."

1:30pm at Seanchai SL in the Fireside Room
TEA TIME at Baker Street
Join Corwyn, Kayden, and Caledonia as they continue at the beginning of the Holmesian canon - "The Adventures 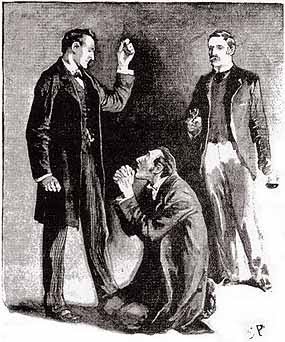 THIS WEEK: The Adventure of the Blue Carbuncle

As prepares for Christmas, newspapers report the theft of the near priceless jewel, The "Blue Carbuncle", from the hotel suite of the Countess of Morcar. John Horner, a previously convicted felon, is soon arrested for the theft. Though the police have yet to find the jewel, and despite Horner's claims of innocence, the police are sure that they have the thief - or at least one of them. Horner's record, and his presence in the Countess's room where he was cleaning a fireplace, are all the police need.

At 221B, Watson pays a visit to Holmes, finding the detective contemplating a battered old hat, one brought to him by the commissionaire Peterson. Both the hat and a Christmas goose had been dropped by a man in a scuffle with some street ruffians. Holmes is far more interested in the hat than the goose, which Peterson takes home for dinner. Although the hat bears the owner's name - Henry Baker - the police have little hope of finding the man. Peterson soon returns excited, carrying the Blue Carbuncle, claiming that the carbuncle was found in the found goose's throat. How on earth did it get there?

Come find a comfy seat  downstairs by the fireside, and pour yourself a cuppa and enjoy, presented live in voice. All times PDT
Posted by Caledonia S at 7:41 PM