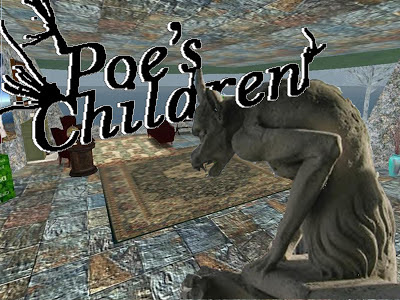 From the incomparable master of horror and suspense comes an electrifying collection of contemporary literary horror, with stories from twenty-five writers representing today’s most talented voices in the genre.

Horror writing is usually associated with formulaic gore, but New Wave horror writers have more in common with the wildly inventive, evocative spookiness of Edgar Allan Poe than with the sometimes-predictable hallmarks of their peers. Showcasing this cutting-edge talent, Poe’s Children now brings the best of the genre’s stories to a wider audience. Featuring tales from such writers as Neil Gaiman and Jonathan Carroll, Poe’s Children is Peter Straub’s tribute to the imaginative power of storytelling. Each previously published story has been selected by Straub to represent what he thinks is the most interesting development in our literature during the last two decades.

Tonight a tribute to the Master of the Macabre.. A special selection from the book "Poe's Children"...

"The Voice of the Beach" by Ramsey Campbell: Demonstrably Poe-like, featuring a neurasthenic narrator, suffocating suggestibility, and nearly palpable imagery.