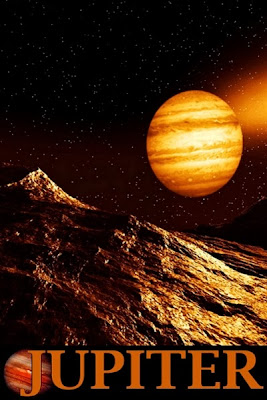 We challenged Gyro to dig deep in his vast Science Fiction Library and come up with a story for every planet in our Solar System.  He did it!  The magical tour continues . . .

TONIGHT: "DESERTION"
Why would every man sent to Jupiter in a modified Jovian form forsake contact with Earth and wander off into the hellish maelstrom?

Kent Fowler is the head of Dome 3 which is part of the Jovian Survey Commission. Already he has sent four men out on to the surface of Jupiter and a fifth man, Harold Allen, stood in front of him. Fowler warns Allen of the importance of the mission and not to go on any rescue mission. The hostile environment of Jupiter doesn't permit humans to walk its surface and so a biological converter is used to transform humans into Lopers, the highest form of native life. In the Loper form, he is able to use one hundred percent of his brain. He compared his old life, and its limitations with his new form and feels a higher call of destiny, a greatness of adventure.
Posted by SLoring at 8:00 PM