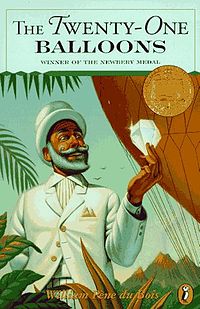 This delightful novel by William Pène du Bois, published in 1947 was awarded the Newbery Medal for excellence in American children's literature in 1948. The story is about a retired schoolteacher whose ill-fated balloon trip leads him to discover an island full of great wealth and fantastic inventions. The events and ideas are based both on scientific fact and imagination.

THIS WEEK: Professor William Waterman Sherman has a secret, when he turns up in the Atlantic in the wreckage of  a mass of hot air balloons.  But he'll not divulge a single detail until he reaches the Western American Explorer's Club in San Francisco!  He'll not even tell the President of the United States! So, the adventure begins.