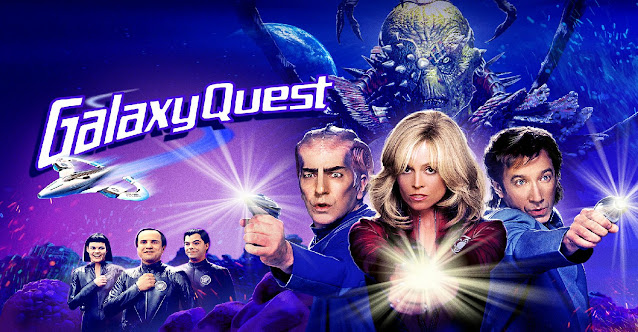 For years, the intrepid crew of the NSEA Protector valiantly entertained millions of television viewers with their voyages through space. Now the crew is on another adventure bravely touring the sci-fi convention circuit and making guest appearance at two-bit computer stores. But their dull existence gets a quantum rocket boost when a group of aliens believing the television episodes to be true "historical documents" enlist the crew's help to save them from an evil alien empire. Now these washed-up TV actors find themselves deep in space, playing their roles as if their lives, and the lives of an entire alien race, depend on it!
Join us in Second Life
http://maps.secondlife.com/secondlife/Nowhereville/204/44/27
and Kitely
grid.kitely.com:8002:Seanchai   or   http://bit.ly/SeanchaiKitely
Book: Galaxy Quest
Author: Ellen Weiss
Screenplay: Robert Gordon
Based on story by David Howard and Robert Gordon
..
..
..
Posted by Seanchai Library at 7:15 PM