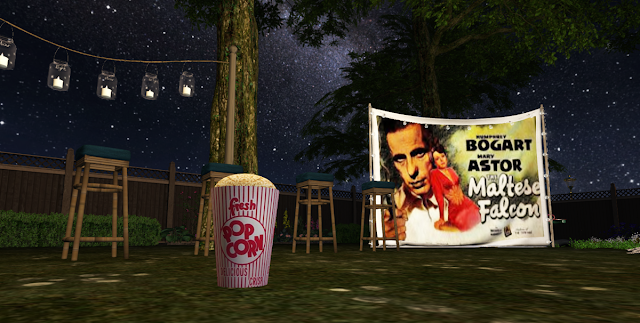 TEATIME at The Movies continues today, our fun summer series were we read from the Lux Radio library, adapting great films of the 20th C

"Spade has no original. He is a dream man in the sense that he is what most of the private detectives I worked with would like to have been, and, in their cockier moments, thought they approached."     ~ Dashiell Hammett

The Maltese Falcon is a 1941 American film noir written and directed by John Huston in his directorial debut, based on the 1930 novel of the same name by Dashiell Hammett, and indebted to the 1931 movie of the same name. The story follows a private detective and his dealings with three unscrupulous adventurers, all of whom are competing to obtain a jewel-encrusted falcon statuette.

Join our cast of readers for a backyard festival of radio drama versions of some of the finest and most beloved films of the golden age of 20th C cinema. Popcorn provided.  Presented live, on Stream.

TWO MORE Episodes left in this series. Next week, The 39 Steps.

Posted by Seanchai Library at 12:02 AM