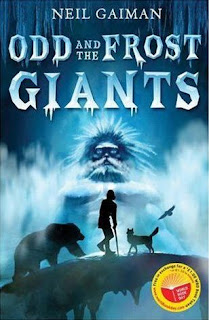 Winter isn’t coming – it’s refusing to go away, but no-one understands why.

Not only that, but Odd has run away from home, despite the fact he can barely walk and has to use a crutch. Nevertheless, he finds his way to the forest, where he encounters three animals: a bear, a fox, and an eagle, and they have a strange story to tell. Listening to them, Odd realises he must now embark on a strange journey, one he can barely imagine.

For he must now set out and save nothing less that Asgard, City of the Norse Gods. For it has been invaded by the Frost Giants, and while they hold it, winter will not pass away.

It’s going to take a very special kind of boy to defeat the most dangerous of all the Frost Giants and free the mighty Gods. A boy who is resolute, cheerful and infuriating and clever…

Both events today are in The Glen:
http://maps.secondlife.com/secondlife/Nowhereville/197/131/21
Posted by Seanchai Library at 7:16 PM