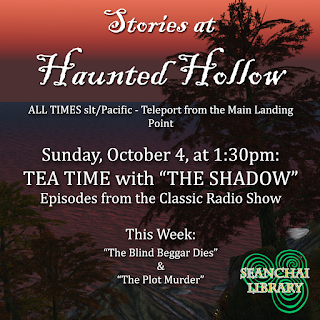 The TEA TIME crew presents episodes from the classic radio show at The Ledge Story and
Dance Space, at Haunted Hollow in the first session of a three week series.
Originally created to be a mysterious radio show narrator, The Shadow was developed into a distinctive literary character in 1931 by writer Walter B. Gibson.
The Shadow debuted on July 31, 1930, as the mysterious narrator of the radio program Detective Story Hour, which was developed to boost sales of Street & Smith's monthly pulp Detective Story Magazine. When listeners of the program began asking at newsstands for copies of 'that Shadow detective magazine', Street & Smith decided to create a magazine based on a character called The Shadow.
On September 26, 1937, The Shadow, a new radio drama based on the character as created by Gibson for the pulp magazine, premiered with the story "The Death House Rescue", in which The Shadow was characterized as having 'the power to cloud men's minds so they cannot see him'. In the magazine stories, The Shadow was not given the literal ability to become invisible.
The introductory line from the radio adaptation of The Shadow - 'Who knows what evil lurks in the hearts of men? The Shadow knows!' - spoken by actor Frank Readick, has earned a place in the American idiom. These words were accompanied by an ominous laugh and a musical theme, Camille Saint-Saëns' Le Rouet d'Omphale ("Omphale's Spinning Wheel," composed in 1872). At the end of each episode, The Shadow reminded listeners that 'The weed of crime bears bitter fruit! Crime does not pay. The Shadow knows!' (However, some early episodes used the alternate statement, 'As you sow evil, so shall you reap evil! Crime does not pay... The Shadow knows!'
Presented live on stream with Da5id Abbot, Elrik Merlin, Corwyn Allen, Kayden Oconnell, Gloeriana Maertens, and Caledonia Skytower.
There will be a teleport from the main landing point. NOTE: While Isle of Joy is an adult region, none of the content of Haunted Hollow is adult in nature.
http://maps.secondlife.com/secondlife/Island%20Of%20Joy/149/24/46
Posted by Seanchai Library at 7:04 AM