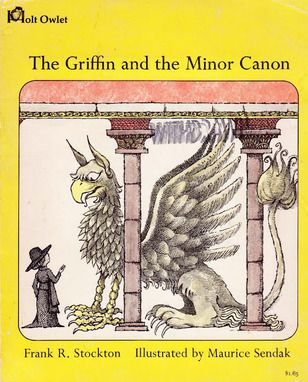 Presented on Stream.
@ 7PM: The Griffin & The Minor Canon
Willow Moonfire reads Frank R. Stockton’s tale. Hearing of a stone image over the main door of an old, old church, the last remaining griffin flies down to the town to sate his desire to learn about how he looks to others. His arrival stokes fear among the townsfolk, who demand the church’s young canon go and learn what “the monster” wants.

Caring only for the well-being of the people, the canon escorts the griffin to his stone likeness, who is well pleased by the statue, regarding it as an “admirable likeness”. So much so, that he decides to stay, following the young canon as he goes about his daily tasks.

The townsfolk, however, are less than happy with this turn of events, fearing for their safety and what might happen at the time of the Autumn Equinox, when the griffin must partake of food. And so they conspire to send the young curate out into the wilds as the equinox arrives, hoping he will lead the griffin away and little caring if the canon lives or dies.

And so the stage is set for the Griffin’s nobility to be displayed for all to see, shining beside the Minor Canon’s innocence and shaming the selfishness of the townspeople.  Presented on Stream.
Both sessions:
http://maps.secondlife.com/secondlife/Holly%20Kai%20Estates/223/61/2966
Posted by Seanchai Library at 9:13 AM