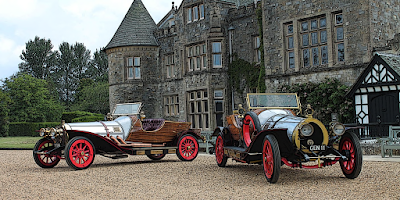 So, you think you know the story because of the film? Well, guess again! The famous 1968 film can best be described as being loosely based on the children’s story by Ian Fleming, the creator of James Bond.

Fleming’s last novel, Chitty Chitty Bang Bang was published posthumously, and initially in three volumes, two months after his death in August 1964. He took his inspiration for the titular car from a series of post-War World I aero-engined racing cars called “Chitty Bang Bang”. They were built by Count Louis Zborowski at Higham Park, in Kent, England, and one of them, the “Higham Special” went on to take the land speed record in 1926 with a speed in excess of 170 mph, after it had been purchased by racing driver J.G. Parry-Thomas specifically for that purpose.

In the book, the car is a Paragon Panther, a powerful 1920s touring car that is restored by Commander Caractacus Pott. At first the car is just that – a powerful 4-seater tourer Pott uses to transport himself and his wife and children around. But then the car starts to exhibit a “personality” and abilities beyond those of any normal motor vehicle. Some of these will be familiar to those who have seen the film, but where the latter options to introduce jealous barons and a wicked Child Catcher, the book offers a more down-to-Earth but equally engaging series of adventures of Commander Pott and his family. (Text borrowed from Inara Pey - thanks Inara!)

Posted by Seanchai Library at 8:28 AM