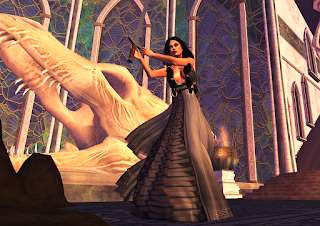 Seanchai Library went to Fantasy Faire for ten days, and many stories were told.  Our Caledonia was there for over two weeks, preparing and then overseeing operations for the LitFest.

Remarkably, she wields a pen almost as handily as she wields a sword, or changes out chair set-ups; and actually she wrote some things - quite a few things.  Tonight she shares selections from the stories and poems she write at this year's Fantasy Faire.