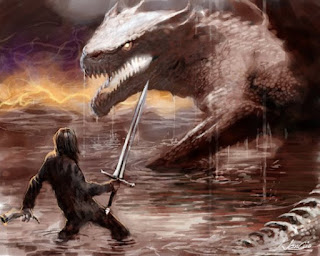 "Magic, curses, doom, and destruction"
SIEGFRIED vs FAFNIR
A young boy must slay Fafnir, a shape-shifting ogre who has transformed himself into a dragon Fafnir lives with his family in a fortress-like house deep in the forest. His father, descended from an archdemon, shares the secrets of the dark arts with Fafnir and his two brothers. Regnir, the eldest, is a deformed dwarf who lusts after gold and relies on his cunning to get it. Hungering only for food, Oter, the middle brother, can transform himself into a bird of prey. The shape-shifting Fafnir desires to be feared, and when Odin, king of the gods, sets a trap with a treasure that tempts every giant, ogre, and dwarf in his domain, Fafnir becomes a dragon. However, he is about to confront an even fiercer rival: a mortal named Siegfried. This adventure-filled Norse myth is a powerful story of magic, curses, doom, and destruction featuring an unlikely hero whose perils are only just beginning.