TUESDAY, November 7th at 7pm: Selections from TALES FROM THE WHITE HART 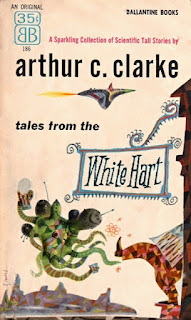 Tales from the White Hart is a collection of short stories by science fiction writer Arthur C. Clarke, in the "club tales" style.

The style and nature of the stories was inspired by the Jorkens stories of the writer Lord Dunsany, whom Clarke admired and with whom he corresponded, a fact humorously acknowledged by Clarke in his introduction to the first Jorkens omnibus volume.

According to Clarke's preface to the book, the book was his third collection of short stories, which were written between 1953 and 1957 in such diverse spots as , , , and .