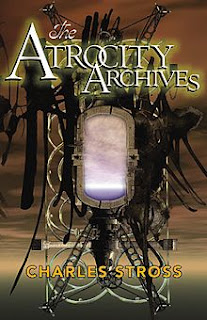 The Laundry Files is a Lovecraftian series of novels by Charles Stross. They mix the genres of spy thriller, science fiction, and Lovecraftian horror. Their main character for the first five novels is "Bob Howard" (a pseudonym taken for security purposes), a one-time I.T. consultant turned field agent. Howard is recruited to work for the British government agency "the Laundry", which deals with occult threats. In this world, computers and mathematical equations are just as useful, and perhaps more potent, than classic spellbooks, pentagrams, and sigils for influencing unseen ancient powers and opening gates to other dimensions. These occult struggles happen largely out of view of the public, as the Laundry seeks to keep the methods for contacting such powers under wraps. There are also elements of dry humor and satirisation of bureaucracy.

While the stories are partially inspired by the Cthulhu mythos universe created by H. P. Lovecraft and others, they are not set in Lovecraft's universe. Stross also decides that in a world where "magic" works, surely the greatest magicians would be scientists who closely study the phenomena; thus his work is replete with a secret history of how various acclaimed researchers of the past also dabbled or stumbled upon occult uses of their work.
Join Corwyn Allen as he continues in The Atrocity Archives, the first volume of the Laundry Files, by Charles Stross.  Live in voice.
http://maps.secondlife.com/secondlife/Bradley%20University/101/208/28
Posted by Seanchai Library at 8:56 PM