TUESDAY, September 24th at 7PM: THE WORDS AND WIT OF DAVID RAKOFF 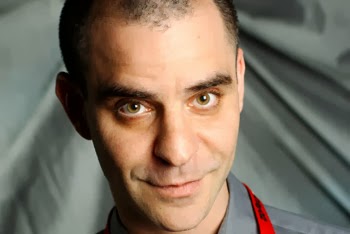 The late David Rakoff died in August a year ago of cancer.  He was a Canadian-born writer based in New York City who was noted for his humorous, sometimes autobiographical non-fiction essays. Rakoff was an essayist, journalist, and actor, and a regular contributor to WBEZ's This American Life. Rakoff described himself as a "New York writer" who also happened to be a "Canadian writer", a "mega Jewish writer", a "gay writer" and an "East Asian Studies major who has forgotten most of his Japanese" writer.

Crap Mariner returns to his "Rakoff Files" to share more essays of wit, humor, and thought-provoking inspiration.  Live in Voice.
Posted by Caledonia S at 7:00 PM