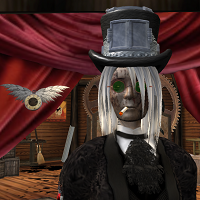 Long ago, he swore an oath to write a 100 word story every day until the day he died.  He's not dead yet.

100w stories ("Drabble") are an incredible writing exercise in economy and precision.  Like the poetic form haiku, it forces the writer to be very specific as each word, each syllable counts - literally and figuratively!  Here is Crap's composition from Friday, May 17th (last week)

"Before I ever read Dickens’ Oliver Twist, I saw a tape of the 1969 musical.
I find musicals stupid. People burst into song over the strangest shit. Everybody dances and spins and laughs and leaps.
Did something get in the water supply? A gas leak making everybody loony?
A little chasing, a little murder, and we find Fagin fumbling his wealth into the muck.
Poor guy. Oh well.
Later on, I read the book.
They hanged him?
Dude. Harsh.
I put the book back on the shelf, sigh, and load up the DVD.
Perhaps musicals aren’t so stupid after all."