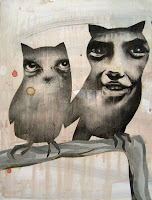 Frank Key is a British writer, blogger and broadcaster best known for his self-published short-story collections and his long-running radio series Hooting Yard on the Air, which has been broadcast weekly on Resonance FM since April 2004. "The Guardian's" literature columnist Sam Jordison has described Frank Key as one of the most prolific living writers of literary nonsense. "The Guardian's" David Stubbs wrote that Frank's prose "reminds of Max Ernst engravings gone Bonzo Doo-Dah".

Crap Mariner present's selections to delight, joyfully presented (well, as joyfully as Crap is capable of) live in Voice.
Posted by Caledonia S at 7:00 PM